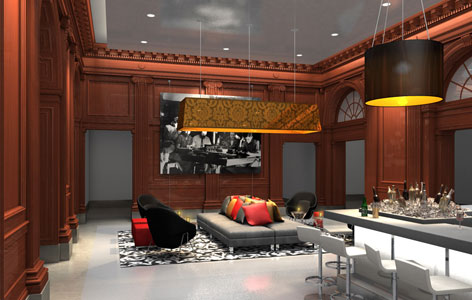 "Le MÃ©ridien is thrilled to welcome guests to two of the nation's most creative communities where we will provide a curated experience enhanced by an atmosphere of European contemporary refinement," said Eva Ziegler, senior vice president, Le MÃ©ridien. "A favorite among progressive, forward-thinking international travelers, Le MÃ©ridien facilitates guest exploration of the arts, architecture, design, cuisine and fashion of each of its vibrant destinations around the world. Philadelphia and Cambridge will certainly provide fertile ground for this voyage of discovery."

Originally built as a YMCA in 1912 and designed by famed architect Horace Trumbauer, the 10- story Georgian revival style building will undergo extensive renovation beginning this month. With the completion of the make-over, Le MÃ©ridien Philadelphia is scheduled to open in late spring of 2009. In this dynamic city, guests will enjoy a rich menu of cultural and historical treasures.

Le MÃ©ridien Philadelphia will be located in the heart of the city's central business district and less than a block from the under-way Philadelphia Convention Center expansion, which is scheduled for completion in 2010. The hotel is within easy walking distance to Independence Hall and other historic sites, upscale shopping and world-class dining. In addition to its thriving contemporary arts scene, Philadelphia boasts a collection of world-renowned museums, including Philadelphia Museum of Art and the Rodin Museum, as well as high-profile cultural performances at the Kimmel Center for the Arts.

"We were honored to have opened the first Le MÃ©ridien in the U.S. in San Francisco, after Starwood acquired the brand in 2006," said Steve Mendell, executive vice president - acquisitions and dvelopment of HEI Hotels & Resorts. "Based on the success of that property, we have become big supporters of the brand and continue to aggressively look for more opportunities to add to our portfolio. With its strong international exposure and increasing demand in the upper, upscale segment, we believe we have a tremendous opportunity to grow with the brand domestically because there virtually are no impact issues. We see that as a win-win for both Le MÃ©ridien and HEI."

The 202-room hotel will offer five floors of 4-star accommodations, a 90-seat restaurant with a 30-seat bar and lounge at the lobby level, a state of the art business centre, 5,300 square feet of technology-enhanced meeting space, and a grand ballroom, which will be located on the third floor and feature dramatic views of Philadelphia's architecturally striking City Hall, three blocks away. The hotel also will feature a central atrium courtyard on the fifth floor of the historic building, boasting a skylight at the crown of its 75-foot ceiling.

"This is our second, adaptive re-use, turn-key project," Roger Clark, HEI's senior vice president-acquisitions noted. "The building has some wonderful, unique, historical architectural elements that we will retain and integrate into the hotel, which is well suited to Le MÃ©ridien philosophy."

Gary Prosterman, president of Development Services Group added: "This is a spectacular building. The millwork at the lobby level would be difficult to replicate today. The building also lays out ideally for a hotel. We are bullish on downtown Philadelphia. The planned expansion of the convention center is 'icing on the cake.' We are thrilled that we can bring the Le Meridien brand, which offers guests a high quality, European-styled hotel, to the city center of Philadelphia".

Located at 20 Sidney Street, adjacent to the MIT campus in Cambridge, Mass., and within a short walking distance of Harvard Square, Le MÃ©ridien Cambridge will occupy a prime spot in University Park at MIT, a premier office and research complex that includes restaurants, entertainment, and retail shops. HEI expects to consummate the acquisition of the Hotel @ MIT later this week and convert the hotel to Le MÃ©ridien Cambridge by the end of the month. The hotel will also undergo a planned renovation in line with Le MÃ©ridien standards. The renovation will be done in phases to minimize disruption to guests.

"This is our first property in the Boston/Cambridge market, which has extraordinarily high barriers to new competition," Mendell said. "The hotel is one of the city's premier hospitality assets. We believe converting the hotel to Le MÃ©ridien brand will further distinguish the hotel and give us the added marketing power of the Starwood frequent guest programs, reservation system and other support. With its strong international exposure and the growing demand in the upper, upscale segment, we are fully behind Le MÃ©ridien and continue to aggressively seek additional opportunities to grow the brand beyond our initial three investments."

Le MÃ©ridien Cambridge is just blocks from three of the world's most renowned academic institutions, including MIT, Harvard University and Boston University, and close to leading attractions in downtown Boston, such as Faneuil Hall, Fenway Park and the Museum of Fine Arts. It is close to the corporate offices for many biotechnology and technology corporations, including IBM, Amgen, Biogen and Genzyme and just 20 minutes from Logan International Airport.